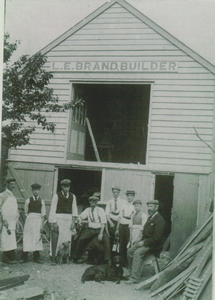 Founded in 1880, L.E.Brand & Sons have been serving the community of Thurrock since 1880. We are the oldest independent Funeral Director in the area and since the company was established we have had five generations of family serve the local community.

The family business of LE Brand has still has business accounts, photographs, and letters at our property in Stanford-le-Hope – some dating back to 1867.

Horses were the main means of transport at the time and Lewis Edward Brand used to make coffins for the undertakers in the area. Consequently he set up his business as local undertaker and the family business is still very strong. It was not long before the business had grown sufficiently and Lewis moved the business to a position in Victoria Road, Stanford-le-Hope at the junction with Southend Road, where The Pet Shop now stands. 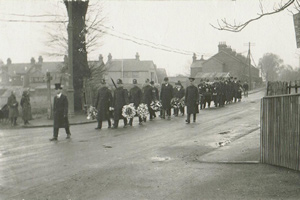 In 1880 he moved his business again to Wharf Road in Stanford-le-Hope. From here he carried on his undertaking profession and also built many houses in Stanford-le-Hope which are still standing today, including a large part of the housing around his business, in Wharf Road, Salisbury Avenue, Rectory Road, and Fairview Avenue. He soon became a very prominent figure in Stanford le Hope, being a local lay preacher for the Wesleyan Chapel.

At the advent of the First World War, Lewis’s son Edward joined up and served in the Royal Flying Corps, whilst his father continued to run the business. After the war he joined his father in the business which was now expanding and in 1923 Lewis decided to join The British Undertakers Association.

Just three years later in 1926 Lewis died and Edward took over the business at 46 years old. Edward concentrated on the undertaking business rather than property and he was asked to arrange some very impressive funerals. 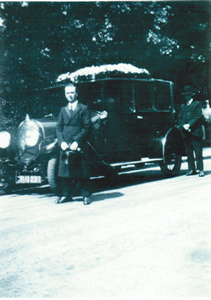 See the photo of E.J. Brand conducting the funeral of Sergeant Wood from 23 Wharf Road (corner of Salisbury Avenue). When he had a number of funerals to arrange Edward would hire extra hearses and horses from various sources. One such source was Mr Hawkins, the owner of Hadfield Stores who ran a milk round. He also owned a hearse which he kept behind his dairy in King Street. Edward used to hire this hearse and the horses which normally pulled the milk float. The business changed from horse drawn carriages to motorised ones as soon as motorised vehicles started to come into vogue.

Edward died in 1968 and in the business passed on to his son Douglas Brand. The business has changed in many ways since Lewis first started it. Douglas then concentrated solely on funeral directing. The original workshop still remains with messages from the past still carved on the old beams.

Doug’s son John now runs the business. The business has now adapted to accommodate business from all over Thurrock; however “Brands” have a reputation for keeping intact all the traditions of funeral directing.

In recent years the company have expanded yet again and now occupies an additional location at 26-28 High Street in Stanford-le-Hope. John has personally overseen the design and completion of our stylishly modern and yet dignified chapels of rest located within our High street branch. John’s daughter Leah has now joined him working in the family business, continuing the family tradition from so many years ago.

To find out more info

You can find out more about which cookies we are using or switch them off in settings.

This website uses cookies so that we can provide you with the best user experience possible. Cookie information is stored in your browser and performs functions such as recognising you when you return to our website and helping our team to understand which sections of the website you find most interesting and useful.

You can adjust all of your cookie settings by navigating the tabs on the left hand side.

Strictly Necessary Cookie should be enabled at all times so that we can save your preferences for cookie settings.

If you disable this cookie, we will not be able to save your preferences. This means that every time you visit this website you will need to enable or disable cookies again.